It seems there is a “movement” of late, of wandering souls taking to the road in their vehicles in pursuit of a nomadic lifestyle. Why not? Modern technology has made the world a much smaller place and working remotely is merely a click away. Van life is the common moniker thrown around to describe this present day itinerant lifestyle. Indeed the hip connotations of van life belie the reality of this burgeoning trend.

This post is certainly not a a “how-to” guide with the answers to all of your pop-up, (nay pop-top), potential scenarios for living in a vehicle. Nor is it a series of journal-type entries, rather it is just a bunch of observations from 12 months, and counting, of living in a van.

Before we set out we spent months planning, organising, writing lists and completing all of the checks on our lists. We already had the most fundamental component of our imminent adventure – Little Elvis II, our van.

Little Elvis II is the most basic of basic model VW Eurovans. He boasts a back seat that folds down into a bed, albeit a bit of an uneven bumpy one, and a small table. That’s it! No cooker, no fridge, no sink, he doesn’t even have working air conditioning! Apparently we did not anticipate driving in triple digit temperatures for days on end. L.E. II’s thermometer did diligently let us know when we hit 120 degrees Fahrenheit in Mexicali, Mexico though.

Minimalist Versus In Need

In the heady days of planning, keeping things cheap and simple also meant keeping a vigilant eye on space being a premium. We chose to forgo a camp stove in an effort to conserve precious space. In hindsight this was not the smartest move. Even a single burner camp stove would have sufficed just to boil water for that all important cup of tea/coffee. 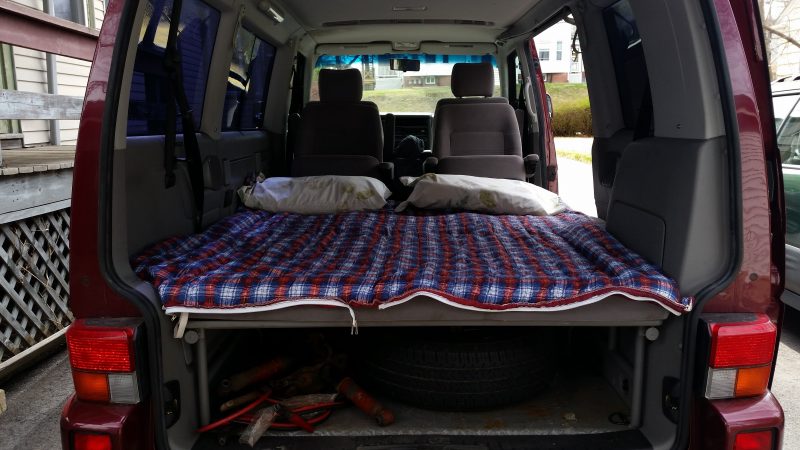 We opted for a power inverter and a couple of travel immersion water heaters (120/240V). Quite simply the premise of plugging the inverter into the cigarette lighter went belly up when we tried to plug both water heaters into the inverter – they fried the fuse. Instead we had to boil one cup at a time which took almost an hour. This proved to be our first and last attempt at making a cuppa in the van.

The immersion water heaters have proved indispensable though when we have stayed in hotels and will definitely be part of our packs when we continue on our travels minus Little Elvis II. 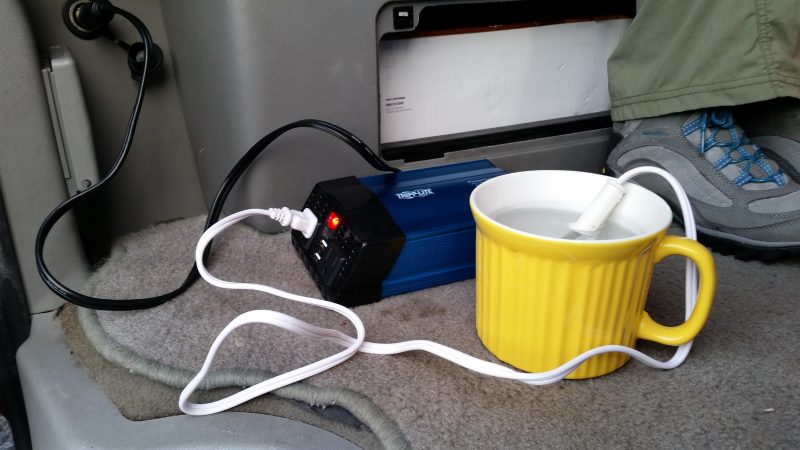 Home is Where You Park It

Online sites are filled with photographic travelogues of beautiful young folk, often with their beautiful dog in tow. Typically they are found in some restful, dreamy repose in their equally stunning vehicle which is usually equipped with an interior finer than a penthouse apartment on 5th Avenue.

For the purpose of separating reality from fantasy (social media), “The Hashtags” shall represent the escapism of online content.

The reality of the matter couldn’t be more different for us. Now although we have found ourselves camping in a few beautiful, isolated spots over the last year, the harsh, sad reality of life found us typically overnighting in Walmart parking lots or truck stops.

As for the interior…

A View to Die For

Following in this vein of “home is where you park it”, what about that priceless view from your carefully selected makeshift camp? Sometimes that careful selection is based on a desire for tranquility and a oneness with nature, often times it’s based on a need for wi fi or necessity to just park for the night. Either way it will come with a view. 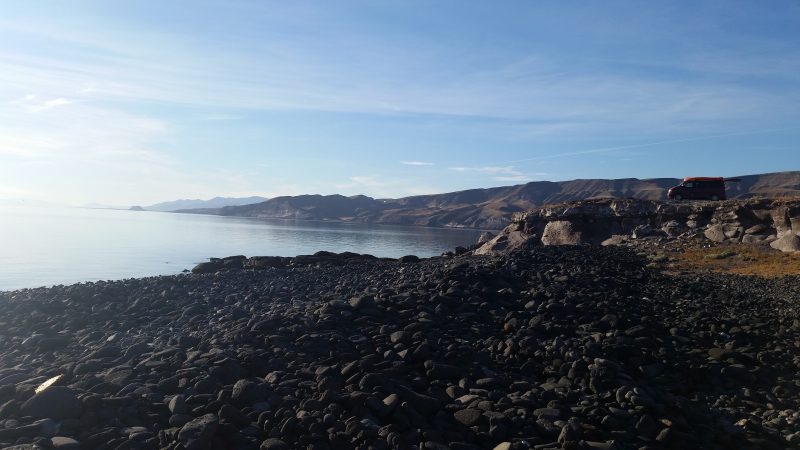 We were already aware we had some dubious company when we reluctantly spent the night at a truck stop in Las Vegas. Surprisingly the night passed without incident. The following morning brought a whole new reality show with it!

It’s amazing how much can transpire in mere seconds. One minute you’re sitting there begrudgingly complying with filling in your travel journal, and the next you’re gathering yourself after instinctively ducking in reaction to the boom that has taken place just outside of your vehicle. In these milliseconds the smoke is already clearing from the distraction smoke bomb detonated by the SWAT team, who are now standing there weapons drawn and trained on their suspects.

Soon you have your own front row seat to a take-down complete with FBI, DEA, and ATF agents. Hashtag suggestions anyone? 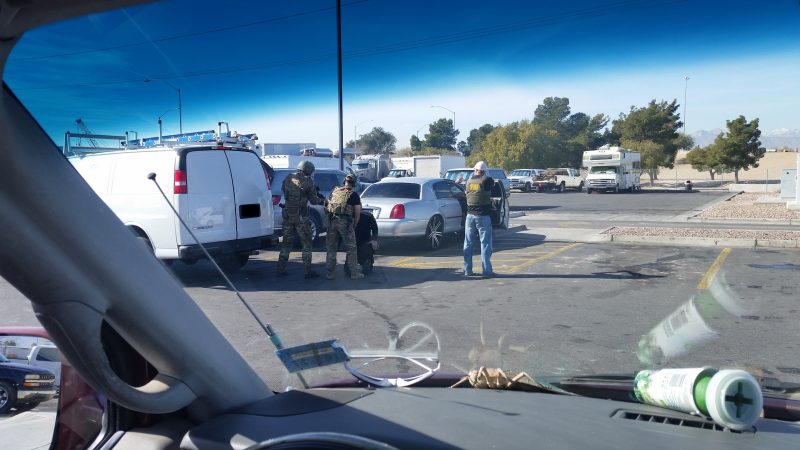 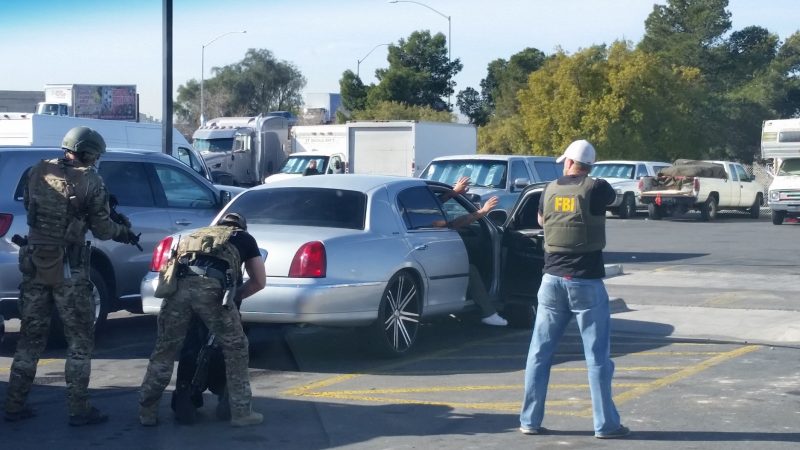 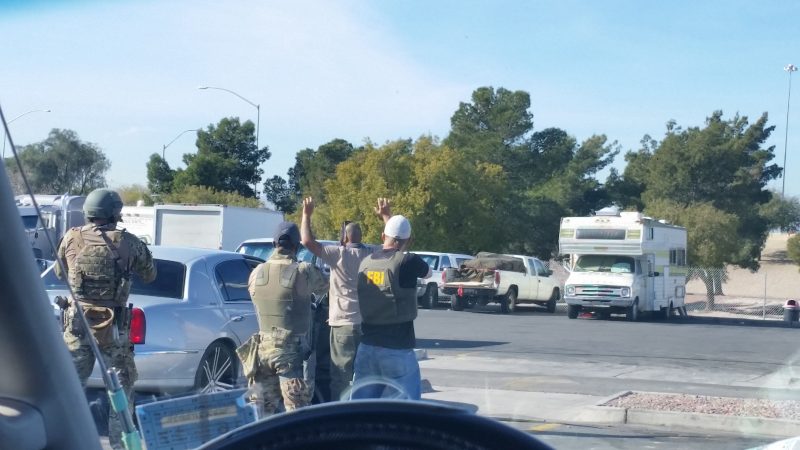 Feed More Than Your Soul!

There is a somewhat esoteric camraderie amongst vanlifers. You have all given up pretty much the bulk of your worldly goods in order to live a simpler, freer life in your vehicle. Vanlifers throughout the world are feeding their souls with experiences instead of material goods, but what about real food? How are they nourishing their bodies?

Vanlifers are comprised of families, single folk, friends, siblings and all manner of human variables. However I would hazard to say couples make up the bulk of nomadic ramblers out there.

Living together in such close quarters 24/7 is certainly one way to find out how compatible you are.

Ah yes, we are all familiar with these dreamy hand-holding couple photos as seen everywhere on couples inspired travelogues. Typically one partner is leading the other into an edenic landscape of bliss.

However the reality of living in a van brings with it the same set of monotonous chores that plague all walks of life. Cleaning, shopping and laundry are all part of the routine. They just don’t make for tantalisingly, exotic locales for a photo shoot. 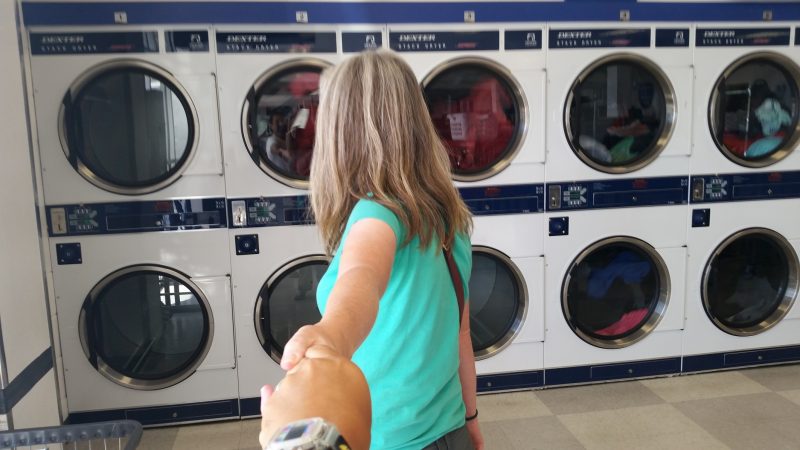 The term “cosy” in this case can be both subjective and objective, depending on how you look at it. The “Hashtags” would have us look at it in a subjective way – the vanlifers happily gazing at each other in their confined yet delightful enclosure (their vehicle). They portray the ideal of vanlife.

The reality of our vanlife is cosy alright! It is like solitary confinement… for two. We have a whopping 26″x28″ of clear space in the entire van in which to stand or move. This is the immediate area just inside the sliding door. Neither of us can stand upright anywhere in L.E.II and then I am only 5′ 1″.

Our first time inside a house after 5 months on the road found us repeatedly standing with our arms outstretched in awe of how much space we had. You can’t even begin to imagine the thrill of being able to stand upright and move around without bumping into each other. 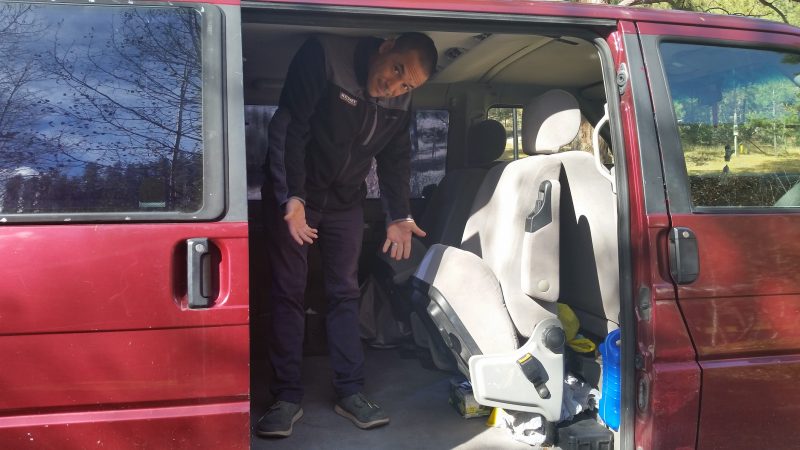 The romance of the open road versus the reality of the open road in a vehicle whose vintage is of a former millenium (1999), are two very different things. All vehicles no matter how old can break down, however the older the vehicle the more likely the need of mechanical attention. Let’s remember these vehicles have been around the block a time or two.

Vanlifers choose this nomadic lifestyle fully aware of the potential mileage they may rack up. Adding miles adds wear and tear to a vehicle and it’s components. Most vanlifers can also tell you of the repair costs they have racked up, regardless of whether a mechanic has fixed the problem(s) or if the van owner themselves was handy enough to resolve the issue(s).

Fortunately for us, Jerry is very adept at dealing with the majority of Little Elvis’ maladies. However we do have one short anecdote which relays the sensitivity that comes with driving an older vehicle.

Early into our trip last year L.E. II began having electrical issues – the wiring controlling power windows, locks and mirrors was cracked and frayed. As a result of which these wires were shorting out and needed attention sooner rather than later. We attempted to have it looked at professionally but the wait times and the estimates we were quoted were incentive enough for Jerry to undertake the issue himself.

After several hours in a Walmart parking lot and Jerry’s perseverance we were on the road again with a fully operational electrical system. Erring on the side of caution we even invested in a fire extinguisher, just in case! Happy to be back on the open road we cranked up our tunes and rolled down the windows, (just because we could).

The joy was short lived. Soon we were exchanging furtive glances with each other at the uncomfortable realisation of smoke appearing in the van. As we pulled over to the side of the road, ready to bail with fire extinguisher in hand we made another realisation, it didn’t smell like smoke. It didn’t smell like anything.

Such was our relief to be driving again, it had put Jerry in a foot stomping kind of mood, keeping beat to our tunes. This rhythmic time keeping disturbed the residing dust in our floor mats, which came to eerily resemble smoke. Given our recent electrical episode we can be forgiven for jumping to such conclusions.

So what does the future hold for us and Little Elvis II? Unfortunately the time will come when we shall part ways with L.E. II, when exactly we do not yet know. Our van life experience has been quite the learning curve on so many levels, but in a nutshell we have enjoyed it. Perhaps the most valuable lesson we have learned is that we are looking forward to travelling as we have done in the past – hitchhiking and public transport. We realise it will be a massive adjustment.

We certainly would not discount van life again at some point in our future and we would be so much wiser next time around. However regardless of how equipped your vehicle is, there is one daily question which is always a constant – “Where do we park tonight?” 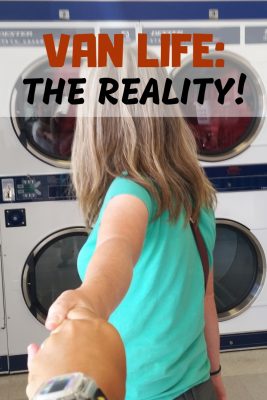 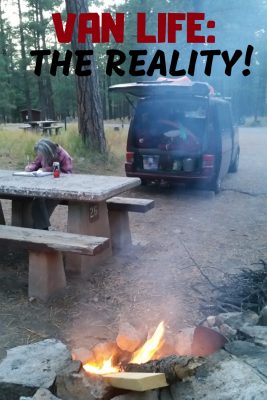