When it comes to archaeological sites and past civilizations, Mexico and Central America bring to mind some real heavy hitters. Crossing your mind right now are the Olmecs, Aztecs, and the Mayans, along with some big league sites like Copan, Tikal, and Teotihuacán. Perhaps you are thinking of Chichén Itzá, Tulum or Palenque.

These ancient ruins, which should not be missed, fall into the category of “Mega-Sites” and visiting one can be just as daunting an experience as it can be awe-inspiring.

The Trundle in the Jungle

You may not be able to beat the humidity and the bugs as you amble around these lost cities. The relentless sun can beat you down in a major way as well. However the sneaky little thing that really packs a punch is the sheer scale of the area, and other humans. After a while of travelling, these sites feel like they do come with certain expectations from the tourists and from those making a living off the trade.

It can feel as if, as tourists, we all should be on a conveyor belt moving along snapping photos before being briefly brought to the next stage of the process; shuffle along off the bus, do battle with the schlock hawkers, kindly decline their offers (or nab a deal!), pay the fee in, and convince yourself what you are seeing may or may not be all that spectacular. This is all good and dandy, or expected, and is a large part of being a tourist/ backpacker/ drifter. It is nice to get away from that from time to time. Please read on…

The amount of different groups who have passed through this region and who have left behind their buildings will blow you away. The Purépechas, who were never conquered by the Aztecs, ruled a vast area mostly in the present day state of Michoacán and left behind pyramids. We were lucky to visit one of them and we had the whole place to ourselves.

One can easily score their own lost world, if one has the desire and knows where to look. Some of these are small, some are quite large. Xuanantunich, in Belize, boasts some mighty fine jungle views. El Tajin, in Northern Veracruz State, is a wonderfully restored site where you can even witness an acrobatic ceremonial act performed by some rather brave souls. It may not be possible to have El Tajin to yourself, but it is quite overlooked considering the size and significance of the place. Check out these fine sites below as you drift around.

Just a short bus-ride from Huehue to the “Ruinas” will take you to the site of the Pre-Conquest capital of the Mam Maya. The inhabitants had flourished here until they were starved into submission by Gonzalo de Alvarado in 1525. A more recent siege of the site came with ties to a “Banana Republic”. No, the site was not a location shot for khakis or chic but comfortable business-casual attire, rather it got a make-over from the “United Fruit Company” in 1946.

Although designated a National Monument in 1931, the Guatemalan government provided the “United Fruit Company” with a license, allowing them to relegate excavations and “restorations” of the site. In their infinite wisdom most of the ruins were “restored” with a coating of thick, white plaster. Ruined or not, you decide! 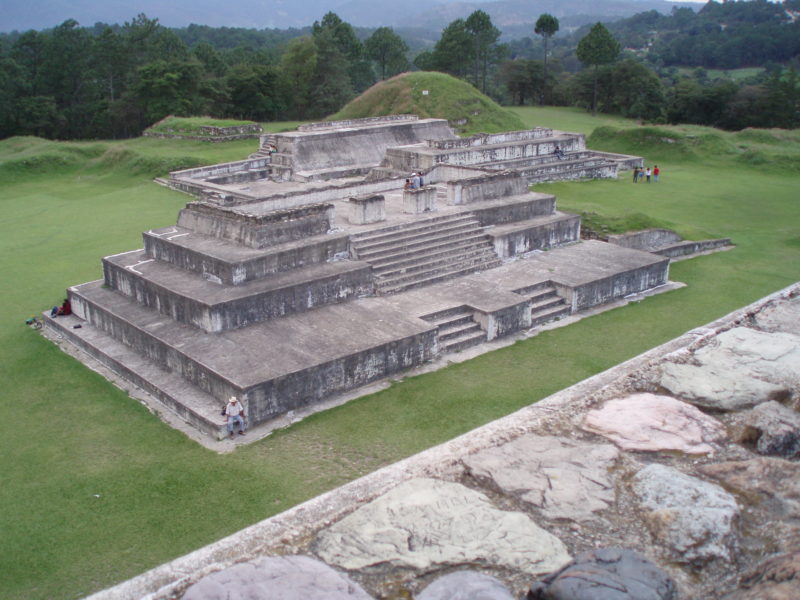 This next little collection of grassy hillocks, some with exposed stonework, is unrestored. It sits alongside the nearby, slowly encroaching town. The main claim to fame of this site is the presence of stelae. Dating to the Classic period (250A.D.-900A.D) of Mayan Civilization, stelae were a common feature of the Lowlands sites but are deemed unusual within sites in the Highlands, where this site resides.

The highlight for us was it’s stunning location. It sits high up on a ridge in the Cuchumatanes Mountains overlooking the San Mateo Valley. Bring a picnic and enjoy the scenery. This site and indeed the town takes a little commitment to get to. There really isn’t an awful lot here, but if you want some beautiful hikes off the beaten path and some peace and quiet, this is the perfect place. The drive alone from Huehuetenango through the Cuchumatanes Mountain range is both breath-taking and hair-raising. 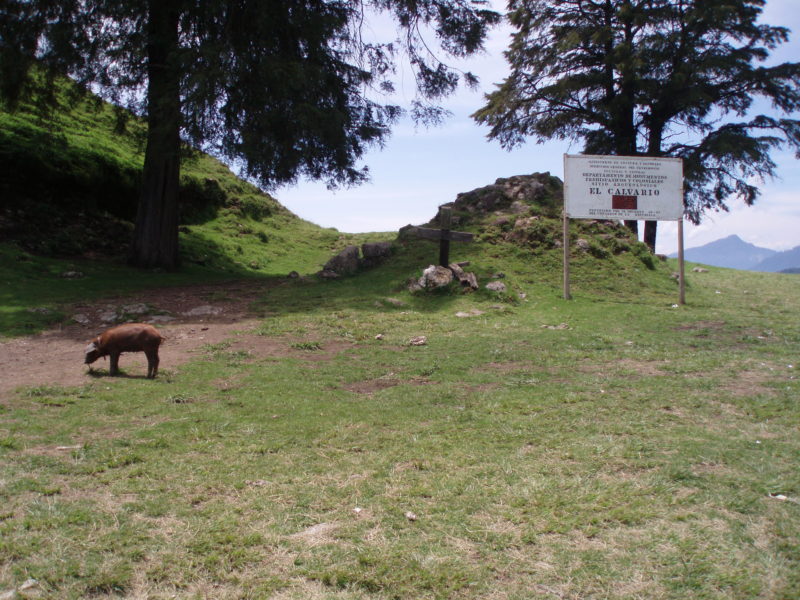 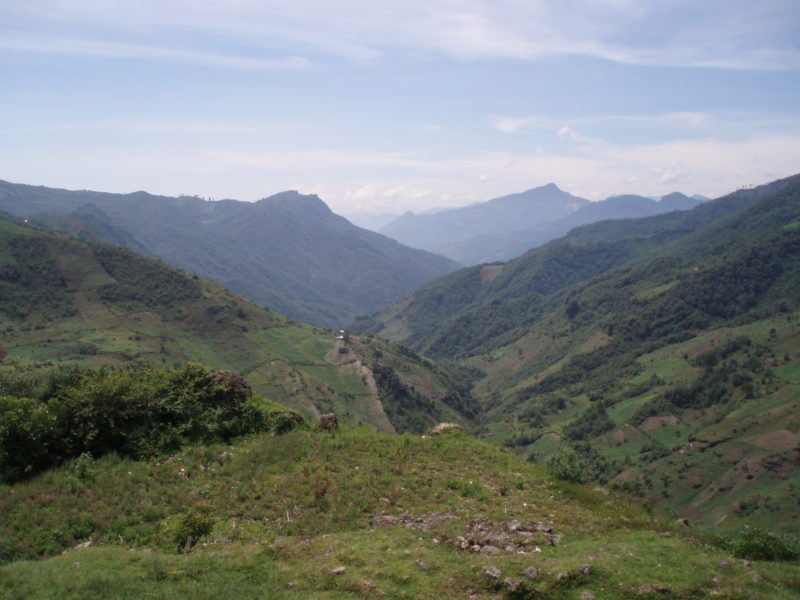 Also known as “Tinganio” in the Purépecha language, meaning “place where the fire ends”. The Purépecha are traditionally known as the “Tarascans”. The Tarascan’s capital was located at Tzintzúntzan, populated with it’s own unique circular stepped pyramids called “yácata”. This indigenous tribe are most noteworthy for having never succumbed to Aztec rule.

Here at Tinganio, construction pre-dates the Tarascan empire, with the site continuously occupied from 450A.D.-950A.D. The pyramid displays stylised traits indicative of Teotihuacan influence, with the use of the talud-tablero (stepped) style. The site itself is quite diminutive making it easy to take it all in, in about an hour or so. It’s located between Uruapan and Pátzcuaro making it a handy half-day trip from either, by car or public transport. Our fascination with the site lay in the avocado groves surrounding it.

This site is located in the Sierra Huimanguillo region of Southeast Tabasco, close to the borders of Veracruz and Chiapas. The site was occupied between 700A.D.-900A.D. and is attributed to the Zoque. In archaeological diaspora much debate and hypothesizing is given to the possible emergence of the Zoque from the Olmec. Both of these ancient civilizations have remained somewhat of a mystery to present day scholars.

The site is strategically located on the side of a mountain and between two canyons. Though small, it’s terraces house the usual suspects – there are mounds, courtyards, platforms, dwellings, religious/ceremonial structures, a ball-court and a hammam (steam bath structure). The hammam is a semi-subterranean structure, associated with pre-game purification rites.

Apparently the site is best known for it’s petroglyphs, except for they are kind of “off-site”. We visited in 2014 and at that time there were no signs to the “petroglyph path” . We attempted to follow the vague directions in our guide-book but to no avail. A word of caution, wear boots or enclosed shoes/runners, the red ants are voracious. We stayed in the small town of Malpasito Raudales, Chiapas, from where we caught a bus to the caseta for Malpasito and then walked the 5km into the site.

This little beauty is a “site” to behold! These Totonac tombs are situated on verdant foothills with a sweeping vista of the coast and are guarded by a towering basalt outcrop known as “Cerro los Metates”. There are about 70 of these little temple-like tombs scattered throughout the site.

Originally a Totonac settlement from 650A.D.-900A.D., there were a series of invasions by the Toltecs and the Mexica between 900A.D. and 1521A.D. Of course after that the Spanish had arrived and were well on the way to subjugating anything that crossed their path.

Coincidentally nearby Villa Rica is where the Spanish under Hernán Cortés set up one of their first settlements. It was also here that Cortés reputedly scuttled his ships in defiance of his then superior, the Governor of Cuba. Cortés, along with the support of the alliances he had made with local tribal leaders, marched on the Aztec capital of Tenochtitlán, where in 1521 the mighty Aztec empire fell.

We took a bus from Veracruz which drops you on the main road near the site. If you’re in the vicinity we would definitely recommend taking some time to explore this unique and little visited coastal necropolis with a view to die for!

This is actually a major site complete with a swanky visitor’s centre and museum. As of 1992 it is also a UNESCO World Heritage Site. Oddly enough it doesn’t attract the throngs of it’s more famous cohorts of masonry. It’s a decent sized site whereby it’s advisable to set aside a few hours to explore. There are also daily performances by Voladores in front of the visitor’s centre.

El Tajin is not giving up it’s secrets too easily. Archaeologists are still unsure of it’s provenance, preferring to attribute it to “Classic Veracruz culture”, with possible ties to Totonac and Huastec cultures. The site was in it’s heyday from 800A.D.-1200A.D. filling “a niche” between the fall of Teotihuacán and the rise of the Aztec empire.

Speaking of niches this is the perfect segue to introduce the star of the complex – the “Pyramid of the Niches”. This utterly unique pyramid has an Asian pagoda-like style to it. It is comprised of seven stories of the talud-tablero (stepped) style. There are 365 symmetrically aligned niches throughout the original structure. Although the site at El Tajin was abandoned in the 13th century and was reclaimed by the jungle for over 500 years, by the time the pyramid of the niches was rediscovered in 1785 it was in remarkably good condition. Very little restoration was required of this exotic looking beauty.

Another anomaly unique to here are the 17 ball courts scattered throughout the complex. The most noteworthy being the North and the South ball courts. Each of these is decorated with sculpted panels showing details of the game, it’s associated deities, ritualistic ceremonies and sacrifices. On panels from both of these playing fields are depictions of pulque and it’s significance both spiritually and ritualistically. The photo on the left displays the ultimate self-sacrifice, the depicted rain god is captured in the act of auto sacrifice, puncturing his penis with a spike for the replenishment of pulque. Ouch! Pulque is less exclusive these days!

The Danza de los Voladores (Dance of the Flyers) is an ancient tradition associated with the Totonac people and is performed on the front courtyard of the visitor’s centre at El Tajin daily. The ritual involves five men, circling a 75 foot pole. Having climbed up the pole, one of the men, known as the caporal, plays a flute and small drum from the centre at the top of the pole. As he plays he also dances and turns addressing each of the four cardinal points.

Meanwhile the other four chaps have attached a rope around their respective waists and the platform on which they are all standing is now turning. The four Voladores launch them-selves off the platform, hanging upside down by their legs. The caporal is still at the top of the pole on the rotating platform, playing the flute and drum as the others descend and slowly spiral in an incredibly elegant, mystical, ritualistic way. Did I mention there’s no safety net!

There is also important symbolism associated with these “bird men”. As they slowly descend each Voladore rotates around the pole 13 times.  As a result there are 4 Voladores, multiplied by the 13 rotations per Voladore, giving a total of 52 circuits, which is representative of the Mesoamerican “calendar round”.

There is a sixth Voladore, who throughout the preparation/cleansing process makes his way through the crowd collecting donations of 25 Pesos per person. These “suggested donations” are more of a demand, right down to the last peso! Bring your pesos to see this incredible spectacle. 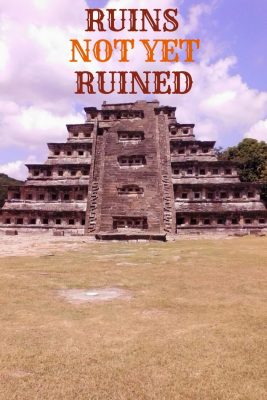 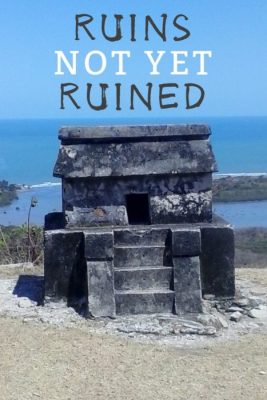