So synonymous with Mexico are Diego Rivera and Frida Kahlo, that as of 2010 they both grace the 500 Peso bill, with Rivera on the front and Kahlo on the back. Their works can be found throughout D.F., it’s outskirts and throughout the country. Rivera is famous for his murals, mosaics and paintings, Kahlo is renowned for her paintings and of course the two are infamous for their on again off again torrid relationship! What follows is just a brief overview of places we visited associated with either or both of them in Mexico City. 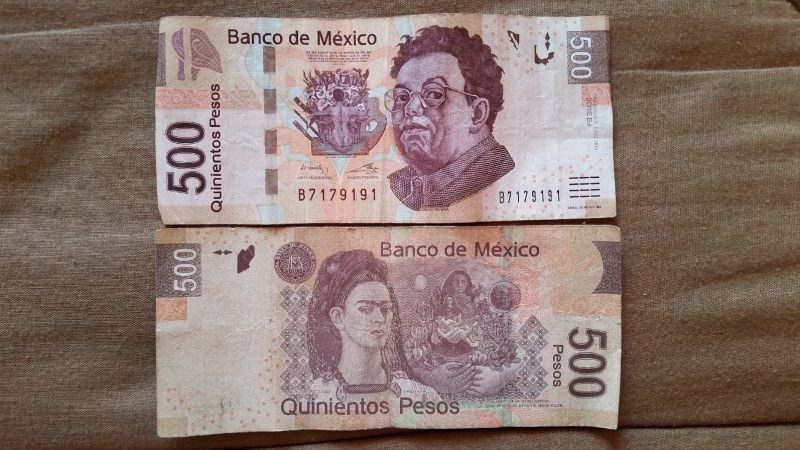 Located at the Western end of the Alameda (the site where victims of the Inquisition were burnt at the stake), this museum is home to various rotating exhibits. The big draw however is “Sueño de una Tarde dominical en la Alameda Central” (“Dream of a Sunday Afternoon in the Alameda Central”). This 15m long mural plays host to a plethora of famous and infamous Mexican figures throughout history strolling through the park.

The focal figure of the piece is La Calavera Catrina (the elegant skeleton, which has become synonymous with Mexican culture). Surrounding her, also central and the most “stationary” figures in the piece are Rivera as a child, Kahlo and José Guadalupe Posada (La Catrina’s creator). Unfortunately like many exhibits and museums there was a separate photographic fee which we did not participate in, hence we have no photos of this one.

Designed by Rivera to house his collection of pre-Hispanic artefacts, it was completed after his death by his friend Juan O’Gorman. This imposing, hulking structure which has something of a Darth Vader like resemblance was built out of the underlying black volcanic stone. Known as “El Pedregal” these lava fields were a result of an eruption of the nearby Xitle volcano back in 5000 B.C.

Aside from the collection of roughly 50,000 pre-Hispanic artefacts, there are sketches by Rivera himself. The most noteworthy being his preliminary studies of “Man at the Crossroads”, the original mural both commissioned by and later destroyed under the tutelage of Nelson Rockefeller for its depiction of communism.

There are also preliminary sketches of “Man Controller of the Universe” – the mural now housed in Bellas Artes, which is seen as the cognate to its destroyed predecessor. If it’s a clear day there are views of the Volcanos Popocatépetl and Ixtaccíhuatl from the rooftop terrace. When we visited Anahuacalli you had to have a guide show you around.

Directions: Take the metro, blue line to Tasqueña, from here take the Tren Ligero to Xotepingo station. Take the Calle Museo exit, once on Calle Museo continue until you cross División del Norte (major road), the museum will be about 500m ahead on your right. You can also ask for directions once you exit the station, we got spun around ourselves with the guide book’s directions.

This would be the Mexican Mecca as cited in the post’s title. Often even those with little or no interest in art find themselves making what feels like the obligatory pilgrimage here when in Mexico City. Indeed often those same folk find themselves impressed with this wee museum’s offerings. Part shrine part museum, Casa Azul is nestled in the Coyoacán neighbourhood.

This was the home of Frida Kahlo where she was born, lived and died. It houses a collection of her everyday personal effects including make-up, her wheelchair, letters, photos, her paints and brushes and original furniture. Her bedroom  displays her death mask and the urn containing her ashes. The kitchen is a show of vibrant blue and yellow, filled with handcrafted, local earthenware vessels and rustic furniture, reinforcing the notion that these two liked to host guests and friends regularly.

Rivera’s influence is found in the courtyard where he had a mini pyramid constructed to display more of his pre-Hispanic collection of artefacts. There is also an annex containing her mobility aides and her unique tehuana dresses.

The museum and it’s curators have done an excellent job in presenting an insight into Frida’s life that leaves even the uninitiated, along with the Frida-philes a sense of appreciation for this woman. That is exactly it, one leaves there knowing more and feeling more for her as a woman and her life that goes beyond her art. Mexican mecca or not, this was another time when we chose to savour the moment to memory, i.e. we did not pay for the photographic opportunities.

Located on the Eastern side of the Zócalo in Mexico City, this is where the presidential offices are. Above the central doorway there hangs the historical and iconic “Campana de Dolores”, the bell rung by Padre Miguel Hidalgo in 1810 heralding the beginning of Mexico’s War of Independence. Every September 15th on the eve of Mexico’s Independence day the president delivers “El Grito” – “¡Viva México!” from the balcony of the Palacio Nacional. Bring your I.D. if you plan on visiting, you’ll need it to gain access.

The murals were painted by Diego Rivera between 1929 and 1951. They emblazen the walls along the main staircase and the north and east walls of the first level above the courtyard. There are also a series of unfinished murals intended to continue to the next level. The dominant murals portray a host of who’s who in Mexican lore, representing life in pre-conquest Mexico, the brutality of conquest and it’s wake, pre-revolutionary Mexico and the ideals of post-revolution.

This little gem is tucked away in the second section (2A Sección) of Bosque Chapultepec (Chapultepec Park). Take the metro to Constituyentes and from here the best thing to do is ask for directions, it’s a tad complicated to get to, but not impossible or even really difficult. Within this same area you will also find “La Feria”, the amusement park and “Papalote Museo del Niño”, the children’s museum. This general area is also a good spot for a picnic as there are significantly less crowds than in the eastern 1A Sección.

The dominant feature is that of the Aztec rain god “Tláloc”, this massive tiled mosaic inhabits a pool guarding the entrance to The Cárcamo de Dolores. Originally built to channel the flow of water from the Lerma River out to the municipal reservoirs of Mexico City, the site has undergone extensive restoration and was re-opened to the public in 2010.

The Cárcamo houses the tank which is covered in it’s entirety with murals representing Rivera’s vision of water and all of it’s life-giving properties. These murals are “El Agua, El Origen de la Vida”. The most symbolic mural is that of two large cupped hands scooping up water. This is directly above the opening into the tank from where the water would have flowed in from the Fuente de Tlaloc.

Being that the intended purpose of the tank was to hold and control levels of water for the reservoirs, naturally over time these life giving waters gradually diminished the murals they washed over, dispossessing them of their vibrancy.  Since the restoration project, water is now diverted from Fuente de Tlaloc and the Cárcamo, leaving these icons unscathed for future generations to enjoy.

Estadio Olímpico Universitario: Admission Free (unless you go to a football match)

Actually this is probably another Mexican Mecca (for some), as cited in the post’s title, for this is the home to UNAM’s (Universidad Nacional Autónoma de México) football club – “The Pumas”. Above the main façade there is one of Rivera’s final mural-mosaics. The mosaic titled “the University, the Mexican Family, Peace and Youth Sports” was originally intended to wrap around the entire outer circumference of the building but for reasons left unknown this never materialised. 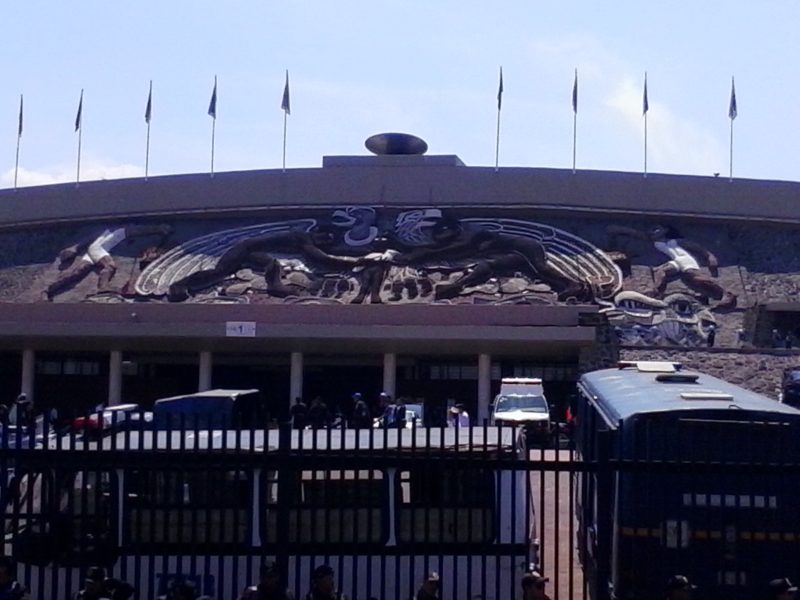 The project was begun in the 1950’s with the intention of using the underlying volcanic rock from the lava fields of El Pedregal as building materials. Rivera died in 1957 and his health had deteriorated in his final years. This is sometimes attributed as to why the mosaic was left incomplete. The 1968 Olympics were hosted here and the embellished entrance, with it’s intended tribute to sports, continues to welcome fans to the present day. 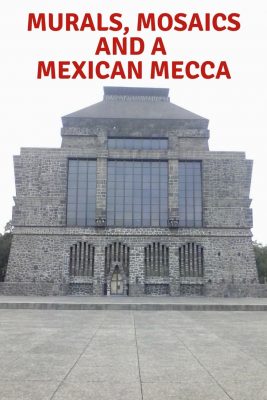