The Baja has long been a destination. However back in the late 1600’s and throughout the 1700’s it was less about staking your claim on the beach for the Winter and more about staking a claim for the Spanish crown.

If you are familiar with the Baja, you are aware of Transpeninsular 1, the main highway that runs the length of the peninsula. With the exception of a few secondary roads, once you turn off Transpeninsular 1 any and all paved roads typically end shortly thereafter. This post focuses on the 5 most intact and accessible Baja California missions, to all motorists.

Disclosure: This article contains affiliate links to products and services whereby we receive a nominal commission if you make a purchase through one of these links. This comes at no extra cost to you. Please see our Disclaimer for full information.

Need a Place to Stay on Your Baja California Road Trip?

You’ll always find somewhere special to stay through Airbnb. From rural getaways to luxury spots in the city, Airbnb’s Baja Mexico listings offer something for everyone. Find your ideal place to stay and wake up ready for more Baja adventures!

For a good selection of conventional accommodations at the best prices we recommend Hotels.com for your next stay. Choose from familiar national chains in the bigger cites or smaller independent hotels.

Although many of these missions have been reduced to little more than piles of rubble over the years, there are some which have been saved by the local communities. Indeed they are often a place of worship for locals and are a focal point within the community.

For more information on this history check out the book Baja California, Land of Missions, by David Kier. The author is a wealth of knowledge on the subject and indeed has dedicated the bulk of his life to researching these historical, colonial outposts. 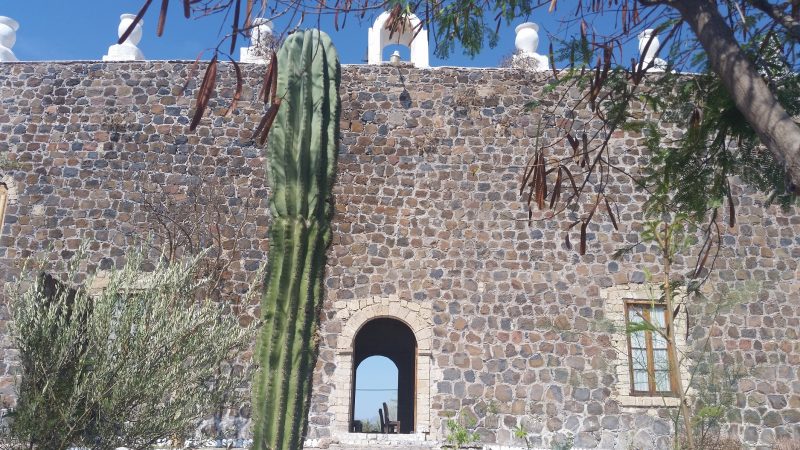 You do not have to categorically align yourself with any particular religious belief system to enjoy a stroll around any of these missions, nor do you have to be a history or architectural buff.

Background on the Baja Brotherhood

Spain implanted the Jesuit order first on the Baja. From 1696 -1768 they founded 17 missions, or 18 including the short lived Misión San Bruno founded in 1684 and closed in 1685. They also constructed “El Camino Real” (the Royal Highway) which linked each of the missions. However rumours of misappropriated wealth led to the expulsion of the Jesuits in 1768.

With their removal they were immediately succeeded by the Franciscans, whose 5 years (1768 – 1773) of implemented religious autocracy saw the founding of one mission – “San Fernando Rey de España de Velicatá”. These ruins, petroglyphs and pictograms lie about 35 miles Southeast of El Rosario. The Franciscans opted out of their Baja duties, and were promptly replaced by the Dominicans.

The Dominicans were the final missionaries who served on the Baja from 1771 – 1834. Throughout their religious reign they introduced 9 more missions to the peninsula. The passing of Mexico’s Secularization Act in 1833 was the beginning of the end of Spain’s missionary envoys.

The arrival of the Spanish missionaries themselves brought more than just religious fervour and proselytizing with them. Indeed, their subjugation of the natives led to the decimation of certain complete cultures and languages. Susceptible “new world” inhabitants were subject to “old world” diseases such as smallpox, typhus, measles and venereal disease, to which they had absolutely no immunity.

Therefore even prior to the passing of legislation the missions were already struggling with their own self inflicted downfall – the shockingly steady demise of the neophytes. Not only were congregation numbers dropping, so too was the missionaries source of labour.

In Mulegé, (Heroica Mulegé) follow the signs to Mission Santa Rosalía de Mulegé, which sits atop a bluff with views of the valley and river below.

The site was founded as a mission in 1705, but the actual construction of the stone structure occurred in 1768. With the rapid demise of the native population the mission was defunct in 1828.

Due to years of neglect extensive restoration restored the church to it’s current standing. Fortunately the mission is now under the protection of the Instituto Nacional de Antropología y Historia (INAH). The church holds mass each Sunday; check locally for service times. Once in a while cultural events are even held here, if you are exceptionally lucky your visit may coincide with one of these.

Make sure you walk up to the overlook at the back of the church. It is an easy enough walk up a sloping pathway with some steps, providing you with views of the valley and the Mulegé River.

Approached on either side through a topiary tunnel of laurel, Misión de Nuestra Señora de Loreto Conchó takes pride of place in the centre of downtown Loreto.

Often referred to as the “Mother of Missions” – at least on the Baja, this mission holds the distinction of being the first successful, permanent settlement established by the Jesuits on the peninsula. Look for the carving above the door attesting to this: “Cabeza y Madre de las Misiones de Baja y Alta California” (Head and Mother of the Missions of Lower and Upper California).

Founded in 1697 by Juan María de Salvatierra, the surviving stone church was begun in 1740 and completed in 1744. Even with the expulsion of the Jesuits, the strategic importance of Loreto secured it’s function as the headquarters for all missionaries, up until it’s closure in 1829 as a result of severe flood damage from a hurricane.

The structural integrity of the church itself has been well preserved over the years, although an earthquake in 1877 took it’s toll (no pun intended) on the bell tower. Construction began on the current bell tower in 1955. Church services are held weekly and the doors are open daily to accommodate the tourists and devout alike.

Follow the sign indicating the turn-off for Misión San Francisco Javier de Viggé-Biaundó on Transpeninsular 1, South of Loreto. It is a 39 km drive from Loreto to the mission on this road.

The entire road to Misión San Francisco Javier de Viggé-Biaundó is now paved. Some older guidebooks indicate a partially paved road. However, this paved road is very windy as it climbs through the Sierra de la Giganta mountains. Take your time and go slow, not just for the scenery but also for the local goats and cattle who like to wander out onto the road at the most inopportune moments!

Initial unsuccessful attempts at establishing a mission resulted in relocating the site to its current resting place in 1710. Construction of the actual stone church took place between 1744 and 1758 under the Jesuit direction of Miguel del Barco. Look for a date of 1751 carved into the stone above the main door lintels. Disease ultimately laid waste to the native population leading to closure and abandonment of Misión San Francisco Javier de Viggé-Biaundó in 1817.

Although the mission underwent restoration it remains one of the best preserved churches on the Baja, often referred to as “the jewel of the Baja California mission churches”. Yet again, the “Instituto Nacional de Antropología e Historia” (INAH) is responsible for protecting and preserving this historical site.

Weekly Mass is held at Misión San Francisco Javier de Viggé-Biaundó. Each year pilgrims celebrate the feast of San Javier here from Dec. 1-3. Thousands of pilgrims from all over Mexico descend upon this tiny village – just a heads up in case you are planning on visiting around this time.

If you are considering visiting any Baja California missions, this is our top choice. Not only is the building beautiful but the drive there is absolutely stunning. I shall go out on a limb here and contend that it is quite possibly the prettiest drive on the Baja peninsula! 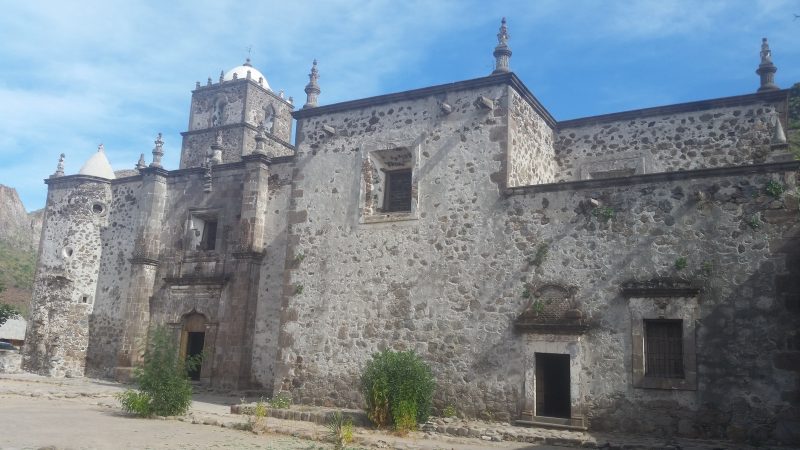 Aside from the church, don’t leave without checking out the other great attraction here. Behind the mission there are actual living remnants of Spain’s occupation on the Baja. Not far from the church you will find 300 year old olive trees planted by the mission’s founding fathers. Make sure you grab a photo of these majestic, gnarly, twisted tree monsters. 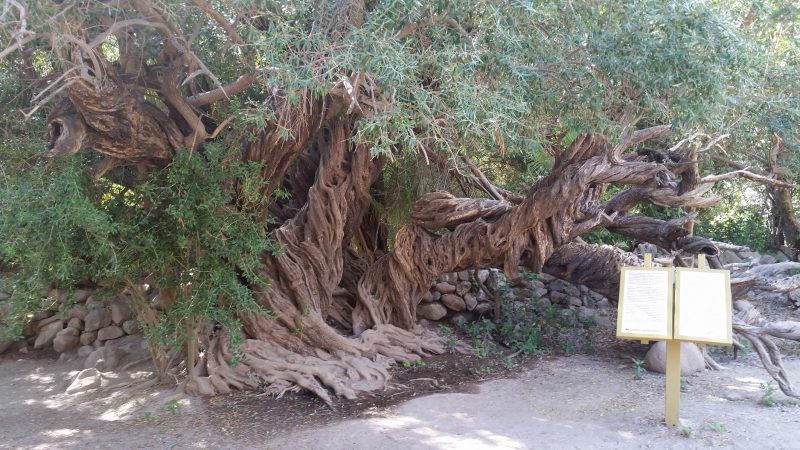 Misión San Ignacio Kadakaamán is located on the town square of San Ignacio, just off Transpeninsualr 1. 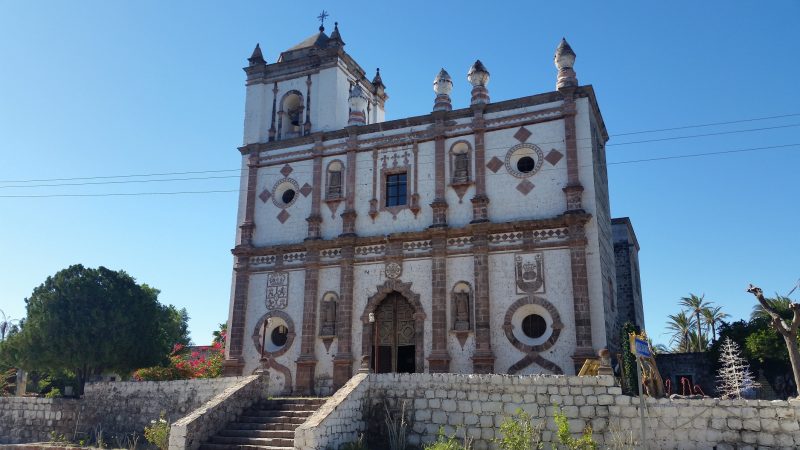 Similar to it’s Mulegé counterpart, Misión San Ignacio Kadakaamán is situated in a palm-filled oasis in the desert. Jesuits founded the site in 1728, however Dominicans completed the stone-cut church in 1786. Although the lush agricultural location contributed to the lengthy success of this mission, it was ultimately abandoned in 1840.

Personally we found the square that San Ignacio resides on as being the closest thing to resemble a typical plaza one would find on the mainland. Towns on the Baja are laid out quite differently to their mainland counterparts and lack a central meeting place – a plaza. Grab a cool drink or a hot chocolate and enjoy the colonial charm of this unique tree lined central square.

Alright, so I may have stretched the truth a tad on the ease of getting to Misión San Francisco de Borja Adac! However if we can make it there in Little Elvis anyone can make it. Give yourself plenty of time; take it slow and be glad you ventured out to this isolated gem in the desert. 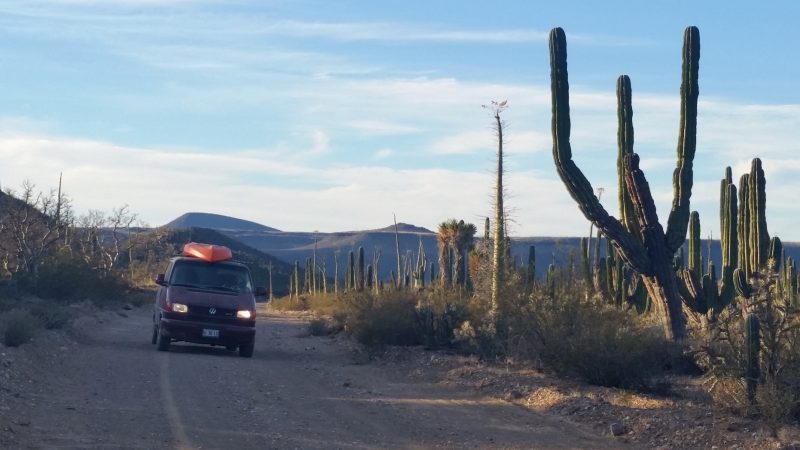 It is possible to make a loop drive to San Borja, as an alternative to the route we took out and back to access the mission.

In the interests of this post we took the north road and what follows is our experience of this route. Our excursion began by turning right at km marker 44 on the road to Bahía de Los Ángeles. At this sign indicating the turnoff for the mission, the dirt road continues for a bumpy, gnarly 24 miles. After about 6 miles you will encounter the following sign – see the photo below.

This sign suggests you go straight. However the placement of the sign between two dirt tracks is somewhat misleading – see the photo below. Effectively it looks like you go straight between these tracks, when in reality one knows it must be one of these dirt routes you follow. Take the track to the right. This was the only point in the drive where we were unsure of the “road”.

Large gouged out ruts, gulleys and divots making for exceptionally slow, careful going for the last 10 miles of the dirt road before you reach the mission.

Prior to the stone structure that stands here now, it is possible to visit the protected ruins of it’s predecessor behind the church. These adobe ruins are all that remain of the Franciscan settlement (1768-1773) which in turn replaced the Jesuit’s buildings.

Dominicans began construction of the existing structure in 1773, ending in 1801. Just like all of the other missions, “old world” diseases decimated the natives, leading to the abandonment of the mission in 1818.

This mission very rarely conducts services. You would be extremely lucky indeed if you found yourself here for such an event.

A sixth generation local – José Gerardo and his family are the caretakers of the mission. Over the years and generations they have restored the building and they continue to be it’s guardians.

José and his family provide tours of the mission, in Spanish only. Unfortunately rambling leisurely through the grounds and church by yourself didn’t seem to be an option. Though the tour is “free”, tips are expected, as is a donation to the restoration of the church.

Arrange tours of nearby rock/cave art and hot springs through José and his family. Picnic/camping shelters and flush toilets have been constructed by the family for visitors. At the time of our visit it was 100MXP per person to camp there. We opted to boondock just a few miles down the road in the middle of the desert. 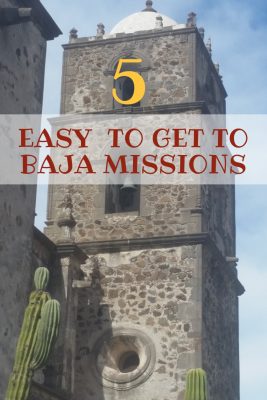 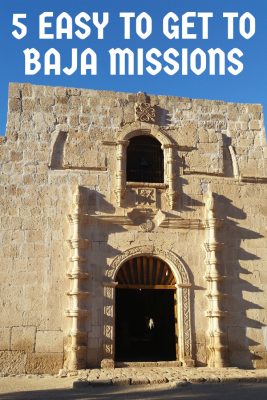