The actual downtown of San Salvador is a bit rough around the edges, to say the least. Actually it looks like nothing has been done since the end of the Salvadoran Civil War in 1992. It is dilapidated, depressed, grimy, gritty and has more than it’s fair share of the usual round-up of sketch-ball characters. You want to hate this city, but you can’t. You may not be woo’d by San Sal.’s beauty (or lack thereof), but it creeps into your affections unbeknownst to you.

Home Away From Home

Let’s start with the basics; where we stayed. The Hotel Pasadena II has become one of our favourite places in which we stayed during our year on the road. Let me clarify, it is very basic, but there is free coffee 24 hours a day and it is very centrally located, and is especially convenient to bus stops. There were also some great, cheap eateries nearby.

We stayed here both heading South and returning North. You may want to check out a couple of rooms before committing to one. Our first room (#26) smelt quite musty with some strong undertones of cabbage, but the staff were very accommodating in switching our room. In 2013 we paid $12 per night for a private room with bathroom. The Pasadena II is located at 3a calle poniente #1037, San Salvador.

The Pompeii of The Americas – Joya de Cerén

If you’ve been to Pompeii don’t be fooled by the moniker. El Salvador’s Joya de Cerén is significantly smaller than it’s Italian counterpart. What they do share is that they are both UNESCO World Heritage Sites and they were both towns that succumbed to volcanic fury.

Joya de Cerén was buried under volcanic ash in 595 A.D. from the Laguna Caldera Volcano. No human remains have been found but archaeological excavations have revealed structures and perfectly preserved articles of everyday agrarian life in a Mayan village.

From our hotel we took the #4 bus to Terminal de Occidente, from here we took the #108 bus to the ruins. Just let the bus driver know you want to get out at “las runinas”, although he/she will most likely have surmised this is your destination. The site is only 23 miles west of San Salvador, so this is a half day trip. Admission: $3, Tues.-Sun: 9-5.

This is a very scenic day trip, just wear some good walking shoes. Volcán San Salvador has two peaks, this is the lower of the two. Known as Boquerón (Big Mouth), it has a second cone within it’s crater. This volcano within a volcano (the second cone) formed June 7th, 1917. 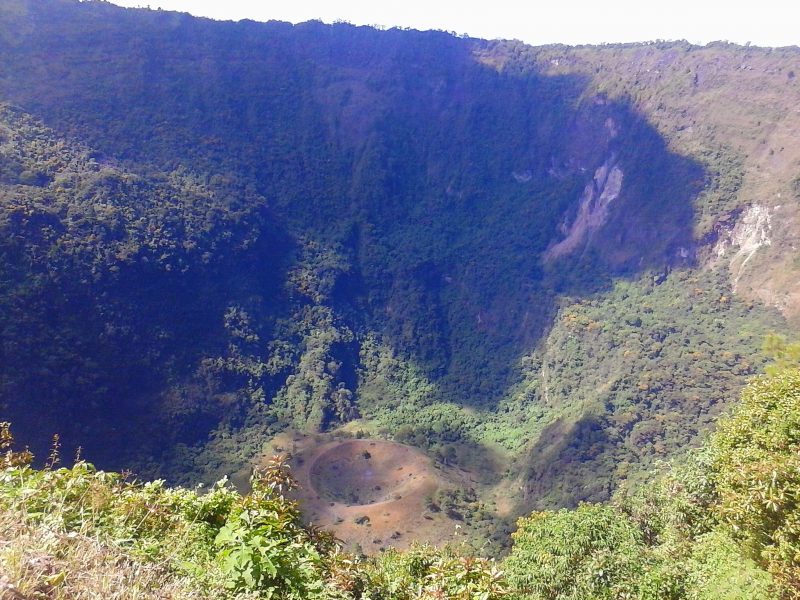 This beautiful, unique park has 4 miradors (over-looks). Apparently you can also hike down to the interior crater, we saw some people down there but have no idea where the trail down is. The park is a very popular day trip with Salvadoreños, so the earlier you can get here the better.  Admission: $1, Open Daily: 8-5.

To get here, we took bus #4 from our hotel to Parque Cuscatlán. From the North side of the park we took route #101B to Santa Tecla. You change buses at Santa Tecla, from here take route #103 to the village of Boquerón. It is a pretty, shaded 1km walk to the park entrance.

This actually refers to a site 8 miles South of the capital, not to one of the many doors downtown providing harbour for any of the resident strung out sketch-balls. It is amazing as the bus leaves behind the unkempt chaos of the city, and begins to climb up into the neighbouring hills how joltingly different this residential area is. It is hard to believe just a couple of miles can gradually render two very different sides of a city.

This natural viewpoint is also the summit of “Los Planes de Renderos”. The 360° views of Lake Ilopango, San Vicente Volcano, the Pacific coast and San Sal. are spectacular. For those with an adventurous streak there is zip-lining and rock-climbing. For the rest of us just watch your footing and enjoy the view.

This area which is a source of joy for so many people today, quietly and unashamedly assumes it’s role of “family fun day out”, yet portrays no visible signs of it’s sinister past. During El Salvador’s Civil War (1980-1992) these cliffs were both execution grounds, and also a convenient means of disposing of bodies at the hands of the government forces. Sadly there is no plaque or memorial to those who were murdered here or whose bodies were brutally dumped here.

Take a #12 bus or #12 collectivo (minivan) from down near the central market. Just ask someone for directions and they will point you in the direction of the #12 terminus. Ask the driver to let you out at “La Puerta del Diablo”, although more than likely you’ll have some sweet locals looking out for you and they’ll let you know when to hop off the bus.

Tucked away on the East side of Parque Libertad sits the none too attractive concrete mass of Iglesia El Rosario. Often compared to an aircraft hangar in appearance, this squat mass of modern decaying concrete blends in rather well with the rest of downtown San Sal. It’s no head-turner, but allow yourself a little time to step through the doors.

Firstly a word of advice, try to get here in the afternoon sunlight to get the full effect of what lies within. The stained glass inlaid in the stepped arch of this structure bathes the entire interior in a warm glow of rainbow colours. The effect is beautiful and the fact that there are no columns in this church leaves no obstructions to hinder this light show. Photographs cannot truly capture or justify this kaleidoscope of colour.

This monument also stands as a testament to El Salvador’s Civil War. If you look closely you will see the walls bear bullet holes and there is a plaque inlaid in the floor where the remains of  21 citizens are interred. These citizens lost their lives here on October 29, 1979 in a brutal massacre foreshadowing the Civil War.

Within the church, the abstract sculptures and stations of the cross are forged from recycled materials including re-bar, iron, concrete and recycled weapons from the War. 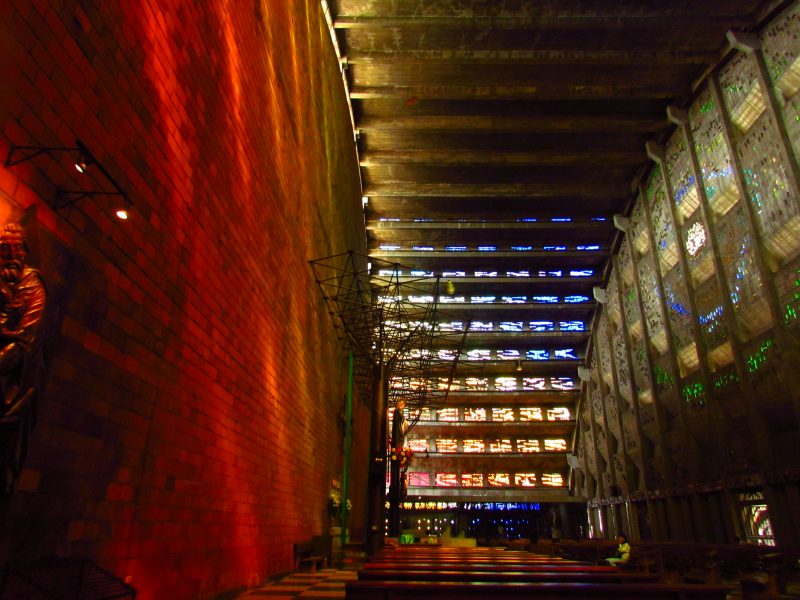 Keep an eye out for the large stained glass eye on the back wall, as shown in the above photograph. You do not have to be religious to appreciate the unique beauty, tranquility and symbolism of this landmark of recent history. This peaceful repose comes with a glowing Drifter’s recommendation.

From a gastronomical stand-point, San Salvador left us with fond mouth-watering memories. We are definitely not talking haute cuisine, but for travellers on a budget it might as well have been.

Our initial wee hole-in-the-wall “go to” was “Comedor la Fuente”. This no-frills, locals hangout saw us stuff ourselves with pupusas, yucca and a drink for $2 each. We ate here a couple of times on our trip South in November. Aside from the food being great value here, the most impressive memory was when we returned in February, a couple of the ladies actually remembered us! 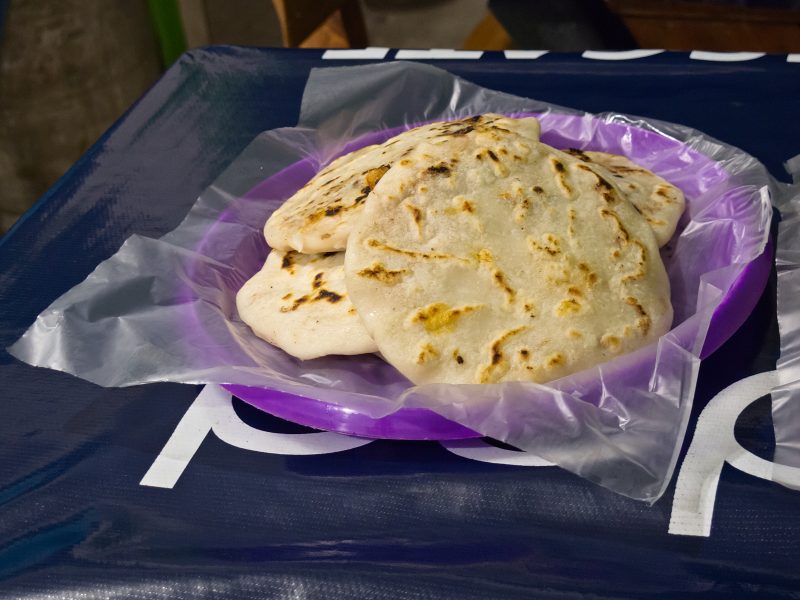 The intervention of happenstance had us stumble upon what was to become one of my favourite food stops whilst on the road. It turns out it was difficult to find eating establishments open on a Sunday where we were staying. After much aimless wandering we found ourselves on a very nondescript street and there in an equally nondescript building was “Restaurante OK”.

This canteen style/steam-table provided a welcome variety of comfort food that would leave any backpacker drooling and promptly entering “eyes bigger than the belly” mode. Here you could point at stainless steel troughs holding mashed potatoes, roast potatoes, beef stew, whole roasted turkey carved to order, vegetables, salad, pasta and all manner of goodies that you hoped the tray could bare the weight of. Sheer indulgence!

You can find “Restaurante OK” at 23 Avenida Norte #126. It is located near Hospital Bautista, in fact you would almost be forgiven for thinking this was the hospital’s staff canteen. Please keep in mind this is standard fare; note the mention of stainless steel troughs above. “Restaurante OK” comes with a strong Drifter’s recommendation.

One of my favourite snacks from way back when I was in college is black coffee and popcorn. Don’t ask why, they are just two flavours which I find really complement each other. Not all popcorn is created equal. We snacked on a lot of palomitas (popcorn) during our year on the road. El Salvador offered the brand par excellence. Although not confined to San Salvador, it was definitely easier to come across “Diana” Palomitas in the big city. Do yourself a favour and grab a bag; you don’t even need the coffee to enhance this experience. Don’t forget though, if you are staying at “Hotel Pasadena II” you will have access to free coffee 24 hours a day. San Salvador is raw and real. It has not been gussied up for the tourist coin. This may leave a lot of folk feeling uncomfortable. It’s reputation as being unsafe precedes it. Our personal experience cannot argue with the fact that downtown is a stark representation of reality – abandoned buildings, abandoned people and abandoned rubbish.

Perhaps it was the realness of San Salvador that we fell in love with. The people we encountered here were some of the friendliest we met. There were no hawkers or touts latching on in a futile effort to extract a dollar or two from us. I’ve never had so many people offer me and my backpack a seat on a bus as I have here. San Salvador won’t be winning any “tidy town” competitions any time soon, but it definitely won it’s way into our hearts. 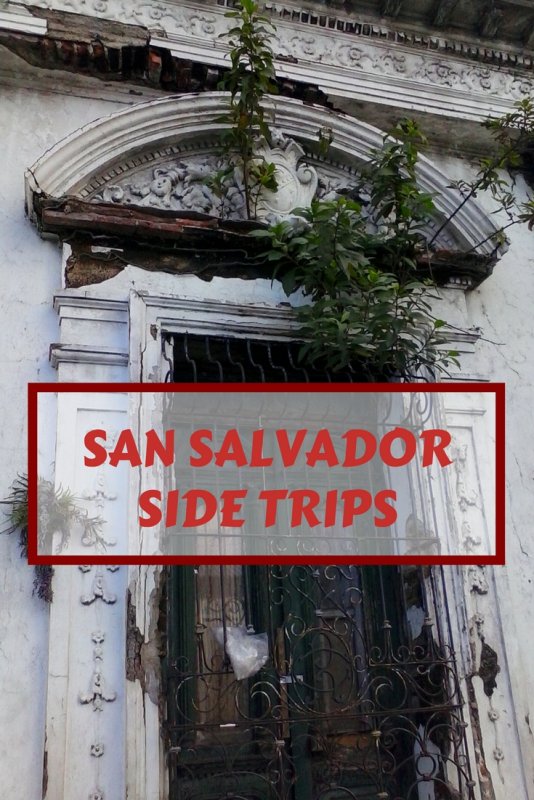