We never pre-book accommodation, knowing there is always something out there. Finding that something tends to involve shopping around and haggling. Our boat docked on Big Corn Island at around 11pm, so shopping around that late in the dark just added another dimension to our already long strange day of pangas, patience, puke and pork chops. We ended up taking a room whereby, on closer inspection, had mouse-poo everywhere, even on the bed. Undeterred and wrecked we slept soundly in our $10 mouse suite.

Naturally our first order of the day was to abandon our roomies – “Fievel” and friends. It didn’t take long to find what would become one of our favourite hotels and a spot we regularly return to in our wistful dreams, in our current non-travelling lives. The “Beach View” hotel is a hulking mass of jaded and faded cracked concrete and peeling paint, complete with its wrap-around crumbling dolphin balcony. Tip; get a room on the back, you’d be hard pressed to find a more spectacular turquoise Caribbean ocean view from the breezy balcony for 300C ($12) per night. The only minor inconvenience was the mosquitoes, but the mozzie net helped. Even mosquitoes can’t put a damper on going to sleep listening to the ocean. It was love at first sight for me!

Big Corn or Little Corn? Although Big Corn is the bigger island, it retains less tourists than it’s more diminutive neighbour. Most people fly into the airport on Big Corn and promptly depart on one of the scheduled boat crossings to Little Corn. “La Costeña” airline has 3 flights daily from Managua to Big Corn and thus 3 returning to Managua. The panga to Little Corn runs twice daily and it’s departing time is aligned with the arrival of the flights.

Little Corn appears to have a reputation for “getting off the grid” and truly getting away from it all. There are no cars here and electricity can be spotty at best. The town generator provides electricity from 2pm-5am, after that individuals may have their own generators or just live without. For many visitors this is seen as a novel incentive to have to put down their devices in order to relax and possibly look at their surroundings!

We decided to see what all of the hoopla over Little Corn was about for ourselves. There are plenty of accommodation options but we found them more expensive than the sister island. We ended up paying $15 for the night at “The Lobster Inn Hotel”, conveniently located near the dock. There are also quite a few swanky, boutique, tourist-driven ocean front, über “getaways” here. The island is beautiful but the dense concentration of tourists, travellers and back-packers on such a small patch of land makes it difficult to afford everyone their own wee slice of paradise. We left the following morning having spent less than 24 hours there; we couldn’t wait to get back to “our” Beach View. Before our own fact-finding mission out to Little Corn, we asked a regular snow-bird neighbour on Big Corn for his thoughts on Little Corn; his gruff response unfortunately is not printable, not without hurting a lot of people’s feelings. Just use your imagination and be liberal with the expletives.

On that note back on Big Corn there are cars, locals and even a few street lights. The irony to us was that even though it’s bigger and it seems to offer more of the mod cons of life and indeed has a few “low-rise resorts”, it has a much more authentic feel to it than its wee neighbour. This island is no sprawling metropolis. That airport that caters to 3 flights a day is so much more than a connection to the outside world. In between flights kids play football on the runway, cycle their bikes there; locals and tourists alike cut across the runway for a short-cut and livestock graze along the edges. There is a partial chain-link fence and beyond that, this large stretch of tarmac is open to the public and their activities. No FAA, TSA or any other acronym looking out for their greater good, though there is immigration and customs present. When it gets close to the time for a flight to arrive, there suddenly appear the local airport police clearing the runway and preventing access to anyone until the flight has reloaded, turned around, and left 20 minutes later. Aeroplane free, island life resumes! At least this is how things operated back in 2014, please let us know if things have changed.

If you ask around you can get directions from a local as to how to get here. Just ask for directions to “Quinn Hill” sometimes it sounds like “Queen Hill”, but it really is Quinn. It’s not difficult to find just a bit tricky to try to even attempt to give directions here. The walk is beautiful and the views from the hill are fantastic.

The Golden Pyramid was built in 2006 by “The Soul of the World Society”. These folks believe Quinn Hill is one of eight spots in the world where “the vertices of a cube with a diameter the same as the earth itself and placed inside the earth’s orb – intercepts the land surface of the globe”!! The other vertices can be found in the Cocos Islands (Indian Ocean), Hawaii, Santiago de Compostela (Spain), South Island (New Zealand), Buryat (Siberia), Tierra del Fuego (Argentina/Chile) and the Kalahari Desert (Namibia).

This New-Age transcendental wonder now sits in an abandoned playground of rusted-out swings and slides and is overgrown with weeds. Oh yeah, and the Golden Pyramid is actually a pyramid of cracked concrete. There is a railing around it, presumably to prevent one from becoming too energized from this powerful, mysterious site. Perhaps this is why parents don’t let their kids play here any more – the kids return all hopped up and re-energized.

On our first day exploring the island we found “Island Bakery and Sweets”, where Miss Ingrid bakes amazing pan de coco, chocolate cake and an array of other goodies. During our stay we became “Island Bakery” aficionados, or addicts. Our days are spent sitting in bed eating pan de coco for breakfast, listening to the ocean and then mobilising for a leisurely day. First things first, I have to apply my “force-field” – 100 proof sunscreen. I have that wonderful whiter than white Irish skin that burns if I merely see the weather forecast!

On the way to the beach we typically grabbed some “Toñas” (Nicaragua’s national brew) and some more pan de coco. Throughout our 2 week stay our go-to beach was “Picnic Beach”. On the way here you pass “Arenas Beach” with its luxury low-rise hotel and cabanas. Arenas Beach continues and morphs into Picnic Beach –  essentially one long, beautiful stretch of powdery white sands and turquoise Caribbean waters. Although there were other people on the beach we could never get over just how deserted it was in general and how we always had a huge stretch of beach to ourselves. I’m not a beach person and even I enjoyed just chilling here, fully aware of the fact it was January and what we would be facing if we were back in Maine. This was also where I worked on my swimming. Yep, dear readers, this Drifter is a drowner. I cannot swim, but this is something I am working on….still!

In the evenings, as was typical, we self-catered with bread rolls, cheese, tomatoes, sardines and sometimes a yummy vegetable salad in lime juice concocted by Jerry. We went out to eat a few times whilst on the island but generally it was sandwiches on our balcony. We did splurge on some rondon (rundown) soup whilst on Big Corn. This stew/soup consisted of fish, yucca, plantains and numerous other ingredients in a coconut broth. Many restaurants ask that you reserve or place your order the day before; not sure if it takes time to get the ingredients or it just needs time to let the flavours meld. It was really good but wasn’t a patch on tapado in Livingston, Guatemala. Unfortunately just before we left I discovered the best vigorón at the little no name cafe at the dock. We each got a bowl for 50C ($2) per bowl. It was fantastic and made with real pork, not the typical fried pork skin. Wish I’d found this on day one.

Unfortunately our days of bliss and sipping Flor de Caña rum in an idyllic location had to come to an end. We had to push on, as our 90 day CA-4 visa was just about up. This meant exiting Nicaragua and crossing into Costa Rica, as the Northern neighbours of Honduras, El Salvador and Guatemala are the other 3 nations forming the CA-4. Our return voyage is upon the “Captain D”.

Captain D to the Rescue

Tickets went on sale at 4pm at “Fisher’s Cave”, the main bar and restaurant down by the dock on Big Corn. As predicted there was a queue but getting a ticket was no bother, 300C ($12) each. The boat departs at 11pm but it is wise to get there early as the bunks are a “free-for-all”, worse than boarding a “Ryanair” flight. We bade a sad farewell to “our” Beach View and were on the boat by 8pm. We snagged “great” bunks by the stairs/ladder to the large, tarp-enclosed upper bunk deck. The bunks are triple tiered and the boat was jammers.

Compared to the “Genesis”, we arrived on this was like the “QEII”! Sheer luxury or sheer hell depending on your prior experiences. In our case this was sheer luxury. 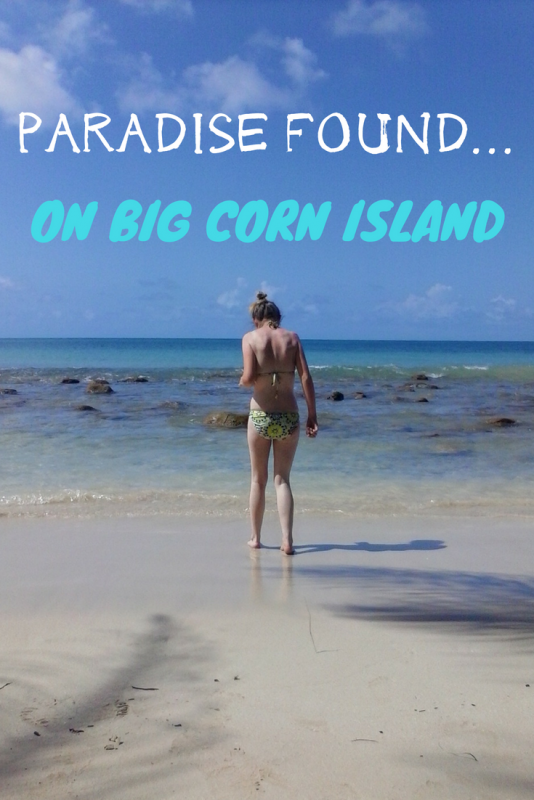